Pregnant women at risk for gestational diabetes who made lifestyle changes during the pregnancy and up to 1 year postpartum showed improved glucose regulation when compared with control patients, according to a recent study published in the Journal of Clinical Endocrinology & Metabolism.

Glucose metabolism from pregnant women (n=200) with either a history of gestational diabetes or a prepregnancy body mass index ≥30 kg/m2 before 20 weeks of gestation who followed Nordic diet recommendations including an increased intake of vegetables, fruits, high-fiber grains, and fish was measured via blood tests and compared with that of control patients.

Glucose impairment at 6 weeks and/or 12 months was noted in 13.3% of participants in the control group and 2.7% in the intervention group (P =.005) In addition, there were no differences between the groups in weight retention, physical activity, or diet at 12 months postpartum.

The study investigators note, “Normal glucose tolerance soon after delivery indicates a faster recovery from the pregnancy-related insulin resistance state and stress to beta cells.” They added, “We believe that creating possibilities for a better lifestyle during pregnancy and the first postpartum year promotes better metabolic health also later in life.” 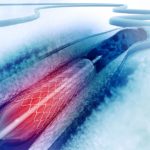 Improved Outcomes With CABG vs PCI for Diabetes With LV Dysfunction