People with bipolar disorder (BD) were found to have significantly different thyroid hormone levels during depressive and manic episodes. These findings, from a cross-sectional study, were published in BMC Endocrine Disorders.

Patients (N=291) with BD were recruited between 2018 and 2019 at the Mental Health Center of West China Hospital. Within 48 hours of hospitalization, blood samples were collected to measure thyroid hormone levels.  Depressive symptoms were assessed using the Montgomery Depression Scale (MADRS) and manic symptoms by the Young Mania Rating Scale (YMRS).

Researchers acknowledged the study was limited because thyroid hormone levels were evaluated at a single time point. Additionally, as a cross-sectional study, the researchers said it “cannot be proven whether mood fluctuations in bipolar disorder are related to changes in thyroid function.”

“These findings indicate that thyroid functions were significantly different between depressive and manic episodes in bipolar disorder patients,” the study authors concluded. “In clinical practice, it is necessary to take into account the differences in thyroid hormone levels in patients with bipolar disorder across different emotional states in choosing [a] drug.” 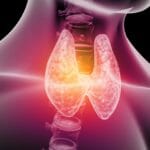