Teprotumumab, a human monoclonal antibody, was recently approved by the US Food and Drug Administration (FDA) for the treatment of TED, also known as Graves’ disease. TED is a rare and debilitating autoimmune disorder that can lead to proptosis, or bulging of the eyes, and cause one or both eyes to move out of the sockets. Proptosis can become chronic and be resistant to therapy, but there’s strong evidence that suggests IGF-IR can play a role in the pathogenesis of TED via the blocking of pathologic immune responses in active TED.

The objective of the current study was to determine the efficacy of teprotumumab proptosis reduction in patients with TED with low inflammation compared with patients with high inflammation activity who previously did not respond to treatment or had a disease flare in two pivotal randomized trials.

The open-label OPTIC-X trial included a total of 15 patients (47.2±1 6.0 years, 10 women) with a TED duration of 11.7±2.2 months with a baseline proptosis of 22.3 ± 2.9 mm. Patients with TED who were previously randomized to placebo in the OPTIC RCT and continued to have proptosis at the end of the study were also included. Those with a baseline clinical activity score (CAS) <4 were part of the analysis.

In the trial, patients received 8 teprotumumab infusions over a 24-week period. The primary endpoint was a teprotumumab response of ≥2-mm proptosis reduction.

“The results suggest comparable teprotumumab proptosis efficacy in TED patients with low-level inflammation as measured by CAS as previously demonstrated in those with high inflammatory activity,” the researchers concluded. 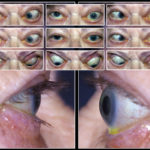