Neck ultrasound and thyroid scintigraphy performed at the onset of thyrotoxicosis were found to be beneficial in predicting the course of disease progression and guiding appropriate treatment selections for optimal outcomes, according to the results of a retrospective study published in the Journal of the Endocrine Society. Thyroid scintigraphy identified persistent hyperthyroidism that responded well to methimazole antithyroid drug treatment. Neck ultrasound characterized signs of destructive thyroiditis that evolved either into euthyroidism or hypothyroidism that responded well to levothyroxine treatment. Calculations of the free triiodothyronine (FT3) to thyroxine (FT4) ratio and measurements of thyroglobulin antibodies (TgAbs) were deemed unreliable methods to differentiate between these 2 types of thyrotoxicosis progression.

The purpose of this study was to improve understanding of the pathogenesis of immune checkpoint inhibitor (ICI)-induced thyrotoxicosis to help guide its management. In addition to hormonal and antibody assessment of 20 patients diagnosed with ICI-induced thyrotoxicosis, detailed analyses of neck ultrasound and thyroid scintigraphy improved the understanding of thyrotoxicosis. Levels of FT4, FT3, thyroid-stimulating hormone (TSH), TgAbs, and thyroperoxidase antibodies (TPOAbs) were tested at screening prior to initiation of immunotherapy and subsequently every 14 to 21 days at each anticancer drug infusion for a period of 6 months. Onset of thyrotoxicosis, defined as high levels of free FT4 and/or FT3 in correlation with low-to-undetectable levels of TSH, occurred at a mean time of 2.5 months following initiation of immunotherapy with a programmed cell death protein-1 (PD1) and a programmed cell death protein ligand-1 (PD-L1) to treat cancer.

Thyroid scintigraphy identified 5 who were Sci+ (denoted by technetium uptake) and 15 who were Sci- (denoted by lack of thyroid uptake of technetium). The 5 Sci+ patients were classified as those who had hyperthyroidism that was successfully treated with methimazole until the end of the final follow-up. Methimazole treatment of 6 Sci- patients proved ineffective and resulted in a longer time to thyrotoxicosis remission (70+15 days) than the other Sci- patients not treated with methimazole. Thyrotoxicosis remission in all 15 Sci- patients occurred after 45±15 days (mean and standard deviation). Ratios of FT3/FT4 were similar in the Sci+ and Sci- groups, thus proving ineffective to differentiate between hyperthyroidism and hypothyroidism caused by thyrotoxicosis.

Cancer treatment with PD1 and PD-L1 blockade resulted in thyrotoxicosis in 30% to 40% of patients, while treatment with an anticytotoxic T-lymphocyte antigen 4 (CTLA-4) triggered thyrotoxicosis in 10% to 20% of patients. This discrepancy was due to the different pathways of these treatments in immune regulation; CTLA-4 affects central tolerance, while PD1/PD-L1 modulates immune responses in peripheral tissues.

The authors of this study recommended continued close monitoring of thyroid function after thyrotoxicosis remission to quickly diagnose and accurately treat hypothyroidism. 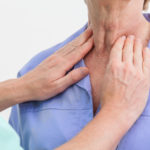