The required amount of I-131 needed to achieve optimal outcomes of initial radioactive iodine therapy in differentiated thyroid cancer remains controversial. Further, clinical trials have sparked interest in the use of initial low-activity I-131 as treatment.

To learn more, researchers conducted a study comparing low-activity I-131 with high-activity I-131 in both low-risk and high-risk patients with differentiated thyroid cancer.

Their findings shed some light on which treatment may be most effective and most safe for patients. 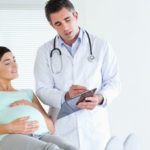 TSH in First Trimester Not Indicative of Adverse Pregnancy Outcomes