A 53-year-old woman presents to her primary care provider with complaints of fatigue, weight gain, and constipation. She states that her weight has gradually increased over the last year despite no change in her activity level or eating habits. She works roughly 8 hours a day as a nutrition assistant, but she falls asleep as soon as she gets home in the afternoon.

She lacks motivation to do anything during the weekend, and notes that she does not feel like herself. Upon questioning, the patient reports the following changes: thinning of her scalp hair, brittle nails, dry skin, and cold intolerance. Physical examination confirms dry skin, brittle nails, coarse and dry hair, and abdominal distension. The only medication she takes is a multivitamin daily. She has a positive family history for autoimmune disorders and stroke.

The thyroid gland is a small, butterfly-shaped gland located in the neck, under the trachea.1 The thyroid functions as an endocrine gland and produces thyroid hormones and calcitonin, which are responsible for controlling metabolism, growth, and serum electrolyte concentrations.1

Similar to other endocrine glands, the thyroid has a regulatory feedback system that starts in the hypothalamus, where thyrotropin-releasing hormone is released into the hypothalamic-hypophyseal portal system and transported to the anterior pituitary gland.2 Thyrotropin-releasing hormone then stimulates the pituitary gland to release thyroid-stimulating hormone (TSH).2 TSH travels to the thyroid and binds to receptors located on the follicular cells of the thyroid gland, where it activates a cascade of events inside the follicular cells that ultimately cause the release of thyroxine (T4) and triiodothyronine (T3), the thyroid hormones.2,3 It is important to note that although the thyroid does produce and release both T4 and T3, most of T3 is made in the periphery via the deiodination of T4.3

Hypothyroidism, the condition in which the thyroid gland does not produce enough hormone, occurs in approximately 4.6% of the population in the United States.4 The vast majority of cases involve women (85%).1,3 Thyroid deficiency compromises almost all body functions, and if left undiagnosed or untreated, it can lead to infertility, Hashimoto encephalopathy, and myxedema coma.3,5-7

Autoimmune dysfunction is one of the major causes of thyroid disease.8 In the case of hypothyroidism, Hashimoto thyroiditis is the most common autoimmune presentation. It is characterized by infiltration of the thyroid by T and B lymphocytes.8 This leads to thyroiditis, an inflammatory reaction of the thyroid gland that leads to the production of antibodies to thyroid antigens, thyroid peroxidase, and thyroglobulin. Ultimately, the follicular cells of the thyroid are destroyed, thereby interfering with thyroid hormone synthesis.8

Risk factors for developing Hashimoto thyroiditis include iodine consumption, smoking, radiation exposure, female sex, aging, and genetics.8 Those with autoimmune thyroid disease are more likely to have other autoimmune disorders (polyautoimmunity). Polyautoimmunity is so common that guidelines now recommend searching for other autoimmune disorders in patients with autoimmune thyroid disease, as well as poor treatment outcomes, before initiating combination therapy for hypothyroidism.8

The manifestation of hypothyroidism can vary markedly from patient to patient. At this time, no clear guidelines exist for screening for hypothyroidism. The US Preventive Services Task Force does not recommend screening patients for thyroid dysfunction.9 Other associations, including the American Academy of Family Physicians and the American College of Physicians, suggest screening for thyroid dysfunction only in women older than 60 years.10 Some clinicians may find it reasonable to screen all patients at risk for hypothyroidism.10 Those at risk include patients with other autoimmune disorders, history of radiation exposure, or family history of thyroid disease; women; and those 60 years of age or older.3

Symptoms of hypothyroidism are nonspecific and reflect the generalized slowing of the metabolic processes and include fatigue, lethargy, cold intolerance, and weakness.3 Signs and symptoms secondary to matrix glycosaminoglycan accumulation include coarse and dry hair, puffy eyelids and face, enlargement of the tongue, and hoarseness (Table 1).3,11,12 Of note, older patients often present with symptoms that could be attributed to other conditions, whereas younger patients usually display signs and symptoms more typical of hypothyroidism.12 Physical signs include an enlarged thyroid, bradycardia, hypertension, and slow relaxation phase of deep tendon reflexes.3 Thinning of the outer halves of the eyebrows, also known as Queen Anne sign, and galactorrhea are rare additional findings.3

Our patient presented early in the course of her condition and had many of the typical symptoms of hypothyroidism. Her family history of other autoimmune disorders was an additional clue. Her presentation led her provider to order a series of tests to help in diagnosis. 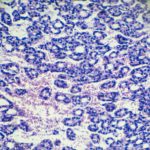 Trends in Incidence of Thyroid Cancer Examined in United States