Adding lithium to radioactive iodine therapy may improve survival in patients with metastatic radioiodine-refractory differentiated thyroid cancer (DTC), according to a new Korean study presented at the 84th Annual Meeting of the American Thyroid Association.

Lithium, which is one of the oldest and most widely used drugs to treat neuropsychiatric illnesses such as bipolar disorder, appears to be safe and effective in patients with metastatic DTC.

“These data seem somewhat limited in their retrospective nature, but lithium might be a potential enhancer for radioactive iodine therapy,” said study investigator Ilhan Lim MD, PhD, of the Korea Cancer Center Hospital, Korea Institute of Radiological and Medical Sciences (KIRAMS) in Seoul.

Dr. Lim said the side effects of this agent are well established and it was well tolerated.

“Clinical signs of lithium toxicity were diarrhea, vomiting, tremor, mild ataxia, drowsiness or muscular weakness. But, there were no patients who complained of these side effects because we told patients to just let us know if they felt side effects.  If patients called us, we made them discontinue the lithium medication. Additionally, we measured the lithium level at the time of admission,” Dr. Lim told Endocrinology Advisor.

The researchers measured treatment responses by assessing serum thyroglobulin levels and the change in tumor size at 6 months posttreatment. Using the Kaplan-Meier method after propensity score matching, they were able to compare overall survival (OS) among 24 patients who received the combination therapy and 48 patients who received conventional radioactive iodine (control group).

They found that 13 patients achieved stable disease and 16 patients had progressive disease in the combination therapy group.  The overall response rate was 45%.

The researchers found those patients who had stable disease at 6 months posttreatment achieved better progression-free-survival (PFS) compared with those with progressive disease (26 months vs. 47 months; P=.070).  However, stable disease was not associated with better OS (P=.42).

Although it was not possible to compare both groups equally, the patients who received the combination treatment survived longer (126.2 months vs. 105.4 months) after propensity score matching, Dr. Lim said.

He also said further studies are warranted to see if taking lithium early in the course of the disease may be beneficial.

Endocrinologist R. Michael Tuttle, MD, who is with Memorial Sloan Kettering Cancer Center in New York, said the effect of lithium on the thyroid can be quite complex. Lithium has been used at many centers around the world for many years, but there is only limited outcome data, he said.

Studies have also shown that lithium can cause the thyroid to be underactive or overactive and cause goiter.

“This approach does make sense. In fact, it has been used in some centers for the last 20 years, but certainly it is not commonly used and deserves more study.” 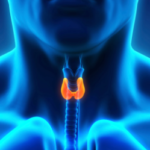 Rituximab Not Effective in Graves’ Orbitopathy