Corticosteroid bursts are often prescribed for non-life-threatening conditions in pediatric populations and have been found to be associated with increased risk of gastrointestinal bleeding, sepsis, and pneumonia within 30 days of initiation, according to the results of research published in JAMA Pediatrics.

Currently, data about the potential harms of short-term oral corticosteroid use in children remain limited. In an effort to address this gap, researchers utilized a self-controlled case series design to conduct a nationwide, population-based study in Taiwan to evaluate the relationship between corticosteroid bursts in children and gastrointestinal bleeding, sepsis, pneumonia, and glaucoma events.

The total cohort included 4,542,623 children, of whom 42% (n=1,897,858) received at least 1 corticosteroid burst over the course of the 5-year study period. The inclusion cohort comprised 1,064,587 participants (51.1% boys; mean age, 9.7±5.8 years; 91% Charlson Comorbidity Index score of 0). Participants were grouped based on whether they received a single corticosteroid burst or 1 or more corticosteroids burst during the observational period, and baseline data indicate comparable characteristics between these 2 groups.

Study limitations include a lack of availability of lifestyle factors, potential concerns related to nonadherence to treatment, and no exploration as to whether antibiotic prescription increased following corticosteroid burst initiation.

“These findings provide real-world evidence for clinicians and guideline developers to implement strategies with optimal benefit to risk ratios for preventing avoidable harms,” they concluded. 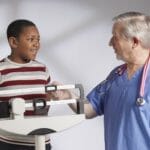 Impact of Traditional vs Year-Round School Calendar on Childhood BMI