New research presented at Obesity Week 2014 shows that 140 million American adults, which is equivalent to about 65% of all adults, are recommended for behavioral weight loss treatment per guidelines from The Obesity Society, the American Heart Association and the American College of Cardiology released in 2013.1

Further, of the adults who are recommended for treatment, 116 million may be candidates for pharmacotherapy and 32 million are also potential candidates for bariatric surgery, according to the study.

“I knew it was going to be a high number because of the specifics of the algorithm, but it does make you stop and pause when you see that number — 140 million is a lot people,” lead researcher June Stevens, PhD, said in an interview with Endocrinology Advisor. “This huge number is not just a clinical problem but a public health problem.”

Stevens and her colleagues used data from the 2007-2012 National Health and Nutrition Examination Survey (NHANES) to estimate the proportion of adults in the United States recommended for treatment based on the Guidelines (2013) for Managing Overweight and Obesity in Adults released last year.2 Adults aged at least 20 years and who were not pregnant were included in their analysis.

The researchers also compared various demographics and found that individuals were more likely to be recommended for treatment if they were older than 45 years, male, African-American or Mexican-American, did not have a college degree and were insured by Medicaid or Medicare rather than another type of insurance. 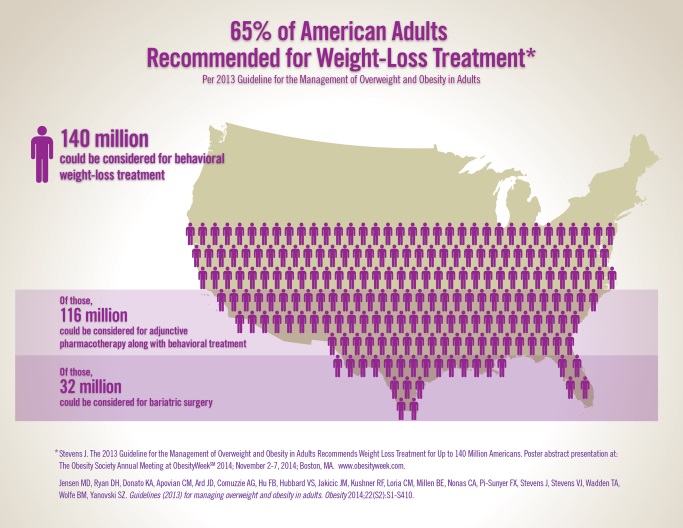 Courtesy of The Obesity Society

The recommendations to lose weight included in the guidelines are based on an algorithm that incorporates weight, height, waist circumference and risk factors like diabetes, hypertension and blood lipid levels.

Stevens, who is a professor of nutrition and Epidemiology at the University of North Carolina, Chapel Hill, said the guidelines address critical questions in obesity treatment and help identify which patients need to lose weight and how much weight loss is needed to improve health. They are intended to offer clinicians empirically-based and effective weight-loss treatments for those affected by obesity.

The guidelines also include discussion of the most appropriate methods for losing weight.

These findings remind health care providers and policymakers that obesity is a disease that needs to be taken seriously, Donna Ryan, MD, professor emeritus at Louisiana State University and a spokeswoman for The Obesity Society, said in a press release. She also emphasized that clinicians and registered dietitians need to review the guidelines and put them into practice.

“The guidelines are intended to provide an evidence-based tool to help physicians,” said Stevens. “Obesity is an extremely difficult condition to treat and very frustrating for physicians. We know that obesity is caused by a disruption in energy balance and we know that behavioral change is difficult. Physicians can’t do it alone. They need a team approach.”