(HealthDay News) — Abdominal obesity is associated with increased risk for hip fracture, according to a study published in the Journal of Internal Medicine.

Anne Johanne Søgaard, PhD, from the Norwegian Institute of Public Health in Oslo, and colleagues examined the correlations of waist circumference, hip circumference, waist-hip ratio and BMI with incident hip fracture. Data were collected for 19,918 women and 23,061 men, aged 60 to 79 years, who were followed for a median of 8.1 years.

“In view of the increasing prevalence of obesity and the number of older people suffering osteoporotic fractures in Western societies, our findings have important clinical and public health implications,” the researchers wrote. 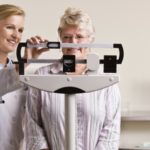 4 Questions to Consider When Treating Obesity