Growing evidence suggests that the pituitary adenylate cyclase-activating peptide (PACAP)/PAC1 receptor system represents one of the main regulators of the behavioral, endocrine, and autonomic responses to stress. Although induction of anorexia is a well-documented effect of PACAP, the central sites underlying this phenomenon are poorly understood. The present studies addressed this question by examining the neuroanatomical, behavioral, and pharmacological mechanisms mediating the anorexia produced by PACAP in the central nucleus of the amygdala (CeA), a limbic structure implicated in the emotional components of ingestive behavior. 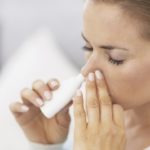