Dysfunction of regulation of prolactin serum levels and abnormalities of glucose metabolism parameters may be related to the acute phase of first-episode psychosis (FEP) more than to a clinical risk for psychotic illness, according to research published in BMC Psychiatry. Patients with schizophrenia are often diagnosed with hyperprolactinemia (HPRL) and glucose and lipid metabolism abnormalities. These neuroendocrine and metabolic abnormalities are found in both patients who use antipsychotic drugs and those with FEP who have never taken antipsychotic medication.

Researchers compared prolactin levels, glycometabolism parameters, and lipid profiles of 31 drug-naive adolescents in the acute phase of FEP with those of 23 control participants at clinical high risk (CHR) for psychosis. Researchers gathered anthropometric data and conducted tests determining glucose levels, glycated hemoglobin level, serum insulin level, triglyceride level, and total and fractionated cholesterol prolactin level. The homeostatic model of assessment was used to evaluate insulin resistance and data from those with FEP and those at CHR were compared using student t-distribution test for parametric data.

Significantly higher levels of prolactin were found in the FEP group than in the CHR group, suggesting a condition of HPRL. Those with FEP were more resistant to insulin than those at CHR. There were no significant differences for lipid profile, body mass index values, fasting glucose levels, or level of hemoglobin A1c.

Researchers suggest that “HPRL, increase in [homeostatic model of assessment], and psychotic symptoms may be considered different manifestations of the acute onset of schizophrenia spectrum psychosis, with a common neurobiological vulnerability emerging since adolescence.” They also note that the influence of age and gender on clinical manifestations of psychotic onset ought to be considered for both early prevention and treatment of schizophrenia spectrum psychosis as well as for neuroendocrine-metabolic dysfunctions. 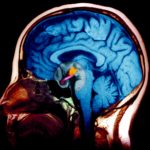