Perioperative major adverse cardiovascular and cerebrovascular events (MACCEs) increase over time and are more common for people with diabetes mellitus than without, according to an analysis of data on over 10.5 million noncardiac surgeries published in Diabetes Care.

Study investigators analyzed data on individuals at least 45 years of age who underwent major noncardiac surgery in the United States between 2004 and 2013.

A total of 10,581,621 hospitalizations were included in the final study sample, 8,143,417 of which were for individuals without diabetes and 2,438,204 for those with diabetes. Among those with diabetes, 3.3% experienced perioperative MACCEs, compared with 2.8% in the non-diabetes group.

Study investigators conclude, “[to] our knowledge, this is the largest study to report on national trends in cardiovascular outcomes for patients with diabetes undergoing major noncardiac surgery. Our findings suggest that a substantial unmet need exists for strategies to reduce the risk of perioperative cardiovascular events among patients with [diabetes mellitus].” 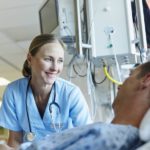