Despite popular belief, metformin — a recommended first-line treatment for type 2 diabetes —appears to work primarily in the gut as opposed to the bloodstream, according to new data.

Researchers discussed these findings in their paper, published in Diabetes Care, on phase 1 and phase 2 studies of investigational delayed-release metformin, which is designed to target the lower bowel and limit absorption into the blood.

“Our clinical trials show that metformin works largely in the lower intestine, reversing half a century of conventional thinking,” John B. Buse, MD, PhD, study researcher and professor of medicine and director of the Diabetes Care Center at the University of North Carolina School of Medicine, said in a press release.

“These findings create an opportunity to develop a new metformin treatment option for the 40% of patients that currently can’t take this first-line drug of choice.”

The researchers also reported that delayed-release metformin was well tolerated.

“One of the top reasons metformin isn’t used for all people with type 2 diabetes is that patients with impaired kidneys accumulate too much drug in the blood, and this can result in life-threatening lactic acidosis,” Buse said.

“These studies provide evidence that delivering delayed-release metformin to the lower bowel significantly reduces the amount of metformin in the blood while maintaining its glucose-lowering effect.” 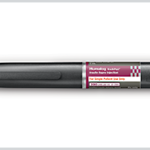