People with type 2 diabetes who quit smoking are likely to experience a temporary deterioration in glycemic control that could last up to 3 years, researchers reported in The Lancet Diabetes & Endocrinology.

“Knowing that deterioration in blood glucose control occurs around the time of stopping smoking helps to prepare those with diabetes and their clinicians to be proactive in tightening their glycemic control during this time,” principal investigator Deborah Lycett, BSc, PhD, of Coventry University’s Faculty of Health and Life Sciences, said in a press release.

In the study, Lycett and colleagues evaluated primary care records of 10,692 adult smokers with type 2 diabetes in the U.K.-based primary care database The Health Improvement Network (THIN) over 6 years to discern a link between quitting smoking and diabetes control.

In contrast, 5,831 (55%) who continued to smoke experienced a more gradual increase in HbA1c. In fact, after 3 years, HbA1c levels in people who quit smoking became comparable with those observed in people who continued smoking 3 years after quitting.

Data from a regression model examining each cohort with and without weight change data indicated that weight changes often linked to smoking cessation did not significantly impact the association between quitting smoking and HbA1c.

“Stopping smoking is crucial for preventing complications that lead to early death in those with diabetes. So people with diabetes should continue to make every effort to stop smoking, and at the same time they should expect to take extra care to keep their blood glucose well controlled and maximize the benefits of smoking cessation,” Lycett said.

In an accompanying comment, Ann E. Taylor, PhD, Neil M. Davies, PhD, and Marcus R. Munafò, PhD, all from the MRC Integrative Epidemiology Unit at the University of Bristol in the U.K., discussed the causal inference in the context of smoking and diabetes.

“Establishing causality is unlikely to alter clinical messages about smoking cessation because the benefits of quitting clearly outweigh any potential negative effects on health. However, better understanding of causal links between smoking and diabetes might help to improve clinical management of diabetes in both continuing smokers and successful quitters,” they wrote. 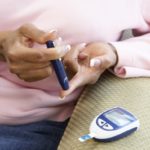