The Food and Drug Administration (FDA) has approved Qternmet XR (AstraZeneca) as an adjunct to diet and exercise to improve glycemic control in adults with type 2 diabetes (T2D).

Qternmet XR is a combination product that contains dapagliflozin, a sodium-glucose cotransporter 2 (SGLT2) inhibitor, saxagliptin, a dipeptidyl peptidase-4 (DPP-4) inhibitor, and metformin, a biguanide. Initiation with Qternmet XR is intended only for patients currently taking metformin.

The approval was based on data from two phase 3 trials which evaluated combinations of dapagliflozin and saxagliptin on a background of metformin over 24 weeks, in patients with inadequately-controlled T2D.

The Dosing and Administration section of the labeling has also been updated to include dosing information for patients who have previously not received dapagliflozin. For these patients, the recommended starting dose is dapagliflozin 5 mg/saxagliptin 5 mg, which corresponds to a new tablet strength of Qtern. 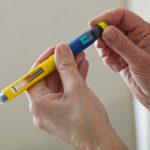