Canagliflozin was not found to be inferior to glimepiride, based on changes in N-terminal pro-brain natriuretic peptide (NT-proBNP) levels, for the treatment of patients with type 2 diabetes mellitus (T2DM) and stable congestive heart failure (CHF), according to study results published in ESC Heart Failure.

Sodium glucose co-transporter 2 (SGLT2) inhibitors such as canagliflozin are thought to benefit patients with CHF, but little is known about the impact of these drugs on cardiac biomarkers, including NT-proBNP, in patients with T2DM and CHF.

Levels of NT-proBNP were assessed at baseline and 24 weeks. The study’s primary outcome was the percentage change in NT-proBNP level during the 24-week trial period. Non-inferiority of canagliflozin vs glimepiride was defined as an upper limit margin of 1.1 for the 2-sided 95% CI calculated for the NT-proBNP percentage change group ratio at 24 weeks.

Echocardiography was used to evaluate systolic and diastolic function at screening, baseline, and week 24. At baseline, the mean left ventricular ejection fraction (LVEF) in the cohort was 57.6%±14.6%, and 71% of participants had preserved LVEF (ie, ≥50%).

There were 9 patients in the canagliflozin group and 13 patients in the glimepiride group who reported 10 and 17 adverse events (AEs), respectively, with 1.7% and 4.1% experiencing prespecified and adjudicated clinical events, respectively. There were 2 AEs in the canagliflozin group that may have been related to the study drug.

Study limitations include possible bias secondary to the open-label design and lack of placebo control, a small sample size, short follow-up period, and lack of an intention-to-treat analysis.

“Further research is warranted to determine whether patients with heart failure with preserved ejection fraction, regardless of diabetes status, could potentially benefit from treatment with SGLT2 inhibitors,” noted the authors.

This study was supported by Mitsubishi Tanabe PharmaCorporation. 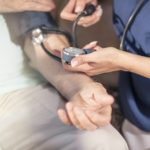