In order to directly compare both incidence and prevalence of cardiorenal disease in patients with type 1 and type 2 diabetes, researchers conducted an observational, longitudinal, full population study using data from 2 large, full-population registries in Norway and Sweden.

Over the follow-up period, event rates were low in participants aged <40 years. Heart failure event rates were significantly higher in patients with type 1 diabetes between 65 and 79 years of age (hazard ratio [HR], 1.31-1.39), while similar findings for myocardial infarction were noted for patients aged 55 to 79 years (HR, 1.30-1.79). Stroke rates were significantly higher in type 1 diabetes, but only among younger patients between 40 and 54 years of age (HR, 1.35-1.72).

The incidence of chronic kidney disease was higher for patients with type 1 diabetes as compared to patients with  type 2 diabetes at all age groups (although intergroup differences were noted and generally decreased as age increased).

Investigators performed subgroup analyses in patients who did not have cardiorenal disease at baseline, and among those with previous cardiorenal disease. In the first group, the “only significant difference” between type 1 and type 2 diabetes were increased myocardial infarction rates among people with type 1 diabetes between 70 and 79 years of age (HR, 1.41-1.70) and increased cardiovascular mortality between 75 and 79 years of age (HR, 1.78).

Study limitations include an inability to accurately determine diabetes duration for the type 2 diabetes population, a lack of data on several important risk factors associated with an increase in cardiorenal disease rates including HbA1c, blood lipids, blood pressure, and obesity, and the use of hospital ICD codes and a lack of access to primary care data, potentially underestimating events in the type 2 diabetes population.

Disclosure: This clinical trial was supported by AstraZeneca. Please see the original reference for a full list of authors’ disclosures. 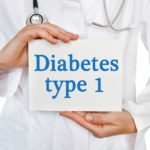