For adults with diabetes, large reductions in ischemic heart disease and stroke mortality were observed between 1988 and 2015, whereas deaths due to arrhythmia and heart failure did not change, according to a study published in Diabetes Care.

From 1988 to 2015, significant decreases were found in all major cardiovascular disease mortality for adults with and without diabetes (P <.05 for all), except among adults aged 20 to 54.

Study investigators concluded that although adults with diabetes have experienced a larger overall reduction in the risk for cardiovascular disease mortality than adults without the disease, diabetes still increases the risk for mortality. Furthermore, the researchers stated, “Disparities in [cardiovascular disease] mortality among adults with diabetes have substantially narrowed, especially between women and men, which suggests that mortality and disparities can be reduced by primary prevention of risk factor exposure, and improvements in detection and treatment at individual, community, health care system, and environmental levels.” 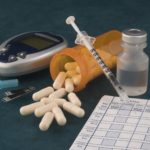