Rates of diabetic ketoacidosis (DKA) were higher among patients with type 2 diabetes (T2D) who were newly prescribed sodium-glucose cotransporter 2 (SGLT2) inhibitors than those who were prescribed dipeptidyl peptidase 4 (DPP-4) inhibitors or sulfonylureas. These findings were recently published in Diabetes Care.

The data for this study were sourced from Optum’s Clinformatics Data Mart Database. Adults with T2D who were prescribed SGLT2 inhibitors, DPP-4 inhibitors, or sulfonylureas for the first time between 2013 and 2019 were assessed for instances of DKA. A propensity matching approach was used to balance cohort differences. Two pairwise comparisons of SGLT2 inhibitors compared with DPP-4 inhibitors (n=85,125) or sulfonylureas (n=72,436) were performed.

In all sensitivity analyses, SGLT2 inhibitors were associated with increased risk for DKA. A significant interaction was observed for gender in the comparison with sulfonylureas (P =.02).

This study may have been limited by not having access to data about glycemic control.

“Clinicians need to be vigilant about this safety signal,” the study authors concluded. 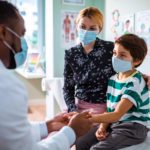 COVID-19 Infection May Cause New Cases of Diabetes in Children