Women with recent gestational diabetes who are older, did not use insulin during pregnancy, and experienced less weight gain while pregnant are likelier to lose 75% of gestational weight gain shortly after giving birth, according to a study published in The Journal of Maternal-Fetal & Neonatal Medicine.

Losing at least 75% of gestational weight gain postpartum was associated with less weight gain during pregnancy (odds ratio [OR] 0.56; 95% CI, 0.39-0.73), older age (OR 1.48; 95% CI, 1.13-2.20), and no insulin use while pregnant (OR 0.08 with insulin use; 95% CI, 0.00-0.73) in a multivariate model with adjustments for weeks postpartum. Both sleep and prepregnancy body mass index were excluded from the model. Other excluded characteristics included education, nulliparity, symptoms of depression, glycemic index, physical activity, composition of diet, cesarean section, breastfeeding, and ethnicity/race.

The mean age of participants was 33 ± 5 years; 57% of the women were white, 20% were Hispanic, and 30% were African American. All participants were recruited during or just after pregnancy, with prepregnancy weight self-reported. Medical records were used to collect data on weight gain during pregnancy, mode of delivery, and use of insulin. Weight and height were assessed at a mean of 7.2 ± 2.1 weeks postpartum, at which point questionnaires were administered that included the topics of breastfeeding, demographics, sleep, Edinburgh Postnatal Depression Scale, Harvard Food Frequency, and physical activity. Multivariable logistic regression models were used to model odds ratios for 75% reduction of gestational weight gain, with the lowest Akaike information criterion used to select the final model. JMP 10–13 Pro was used to complete analyses. 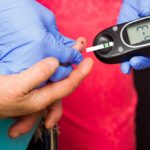