Higher dietary inflammatory or insulinemic potential may be associated with increased risk for type 2 diabetes in adults, according to study results published in Diabetes Care.

The current study sought to investigate the association between proinflammatory and hyperinsulinemic diets and the risk for type 2 diabetes.

Cox proportional hazards regression models were used to estimate the risk for type 2 diabetes associated with quintiles of EDIP and EDIH scores.

During follow-up of over 4.9 million person-years, a total of 19,666 incident type 2 diabetes cases were documented.

Additional adjustment for body mass index (BMI) attenuated the magnitude of the associations, but the strong positive association remained statistically significant for both EDIP (hazard ratio [HR], 1.95; 95% CI, 1.85-2.05) and EDIH (HR, 1.87; 95% CI, 1.78-1.98), suggesting that the effect of diet can be mediated through adiposity.

The association between EDIP or EDIH and type 2 diabetes incidence was stronger among younger, leaner, or more active adults.

In the joint analysis of EDIP and EDIH, patients in both highest EDIP and EDIH quintiles had 4.62 times (95% CI 4.29-4.97) increased risk for type 2 diabetes, compared with

those in both lowest quintiles. The association remained statistically significant after further adjustment for BMI (HR, 2.34; 95% CI, 2.17-2.52).

This study had several limitations, including potential measurement errors as data was based on self-report questionnaires and potential residual confounding by unmeasured variables.

“Dietary guidelines and interventions highlighting the importance of reducing or avoiding inflammatory and insulinemic dietary patterns may have great potential for the primary prevention of type 2 diabetes,” the researchers concluded.

Diabetes Diet and Exercise Type 2 Diabetes
Next post in Diabetes 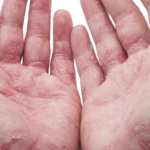 Diabetes Highly Prevalent in Those With Palmoplantar Plaque Psoriasis