Study data published in the Journal of Affective Disorders suggest an association between gestational diabetes mellitus (GDM) and an increased risk for postpartum depressive symptomatology (PPDS).

Researchers recruited women currently enrolled in the Kuopio Birth Cohort in Finland who had no prior history of mental health disorders (n=1066). Gestational diabetes was diagnosed per Finnish clinical guidelines at an average of 24 to 28 weeks of pregnancy. Depressive symptomatology was assessed during the third trimester of pregnancy and 8 weeks after delivery using the Edinburgh Postnatal Depression Scale. A subgroup of the study cohort (n=505) was also assessed for depression during the first trimester of pregnancy.

GDM and PPDS were present in 14.1% (n=150) and 10.3% (n=110) of study cohort participants, respectively. Women with GDM were typically older, had higher body mass index, lower gestational age at delivery, and increased prevalence of caesarean section delivery and PPDM compared with women without GDM. Individuals with GDM had an increased likelihood of experiencing PPDS (odds ratio, 2.23; 95% CI, 1.23-4.05; P =.008) after adjustments for maternal age at delivery, body mass index in the first trimester, smoking before pregnancy, relationship status, nulliparity, delivery by caesarean section, gestational age at delivery, neonatal intensive care unit admission, and third-trimester depression scale scores. Of these covariates, only caesarean section and gestational age at delivery were found to be associated with GDM but not with PPDS. Among the women who were assessed for depression symptoms during the first trimester (n=505), 14.7% had GDM, 7.5% had first-trimester depressive symptomatology, 8.1% had third-trimester depressive symptomatology, and 9.9% had PPDS. In the multivariate adjusted model for this cohort, GDM was also associated with an increased risk for PPDS (odds ratio, 2.43; 95% CI, 1.05-5.62).

These findings suggest an increased risk for PPDS in mothers with gestational diabetes, independent of depressive symptomatology during pregnancy. Such data highlight the necessity of allocating psychiatric resources to mothers in the postpartum period, particularly those who experienced gestational diabetes. 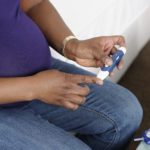