Among individuals in the United Kingdom with diabetes, cancer is the leading cause of diabetes-related death. This is according to research results published in Lancet Diabetes and Endocrinology.

Within the United Kingdom, few studies have examined trends in specific causes of death, meaning that the understanding of diabetes-related mortality is poorly understood. In order to address this, researchers conducted an epidemiological analysis to estimate how mortality in diabetes has changed over time, how the composition of this mortality burden has changed, and how it is compared with the population living without diabetes.

Data were collected from the Clinical Practice Research Datalink (CPRD) GOLD from 2001 to 2018. The CPRD is a primary care database including pseudo-anonymized data of 45 million patients from 674 practices across England, representing 7% of the population.

Within a list of 12 specified causes, death rate per year was higher among people with diabetes compared with those without across the study period, excluding dementia for both sexes and injuries for men in 2001.

The largest absolute decline in specific causes of death was noted in ischemic heart disease, stroke, and diabetes; similar improvements were noted in both men and women, and similar patterns were observed in the non-diabetes population. Conversely, death rates due to dementia and liver disease increased throughout the study period.

In 2018, the largest diabetes-related gap in death rates between the two groups was in the categories of other cancers, dementia, diabetes-associated cancers, and respiratory deaths; researchers noted “much reduced” gaps in ischemic heart disease and stroke. Per researchers, this finding was “driven by a combination of a major reduction in vascular disease mortality in the diabetes population, with declines greater than in the non-diabetes population.”

Study limitations include those inherent to epidemiological analyses, including miscoding, misdiagnosis, and misclassification, a lack of stratification by diabetes type, and missing data in the dataset.

“The large declines in all-cause…and vascular disease death rates have led to cancer being the leading contributor to the gap in death rates between those with and without diabetes,” the researchers concluded. “Further longevity gains and reducing the gap between individuals with and without diabetes will require a shift in clinical and preventive approaches to encompass the wider set of disease risks.” 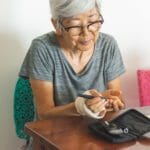