Foot ulcers among people with either type 1 diabetes (T1D) or type 2 diabetes (T2D) were found to occur at an overall rate of 11.2 per 1000 person-years (py) and were associated with a greater risk of amputation or death. These findings, from a national population-based cohort study, was published in Diabetes Care.

Data were sourced from the Scottish Care Information-Diabetes (SCI-Diabetes) database. People (N=233,459) with a diagnosis of diabetes in Scotland by January 1st, 2012, were followed through November 30th, 2017, to assess rates of foot ulceration, clinical outcomes, and various risk factors.

Among individuals who had no foot ulcers at baseline, 4.1% developed ulcers during the follow-up period, and 34.3% of those with a history of foot ulcers developed an additional ulcer. First-time and recurrent foot ulcers occurred at a rate of 7.8 and 97 per 1000 py, respectively, or an overall rate of 11.2 per 1000 py.

The researchers noted there was a possibility of underestimation of people with foot ulcers in the cohort, which in turn may have resulted in underestimating differences between those recorded with ulcers and those without, especially in terms of death or amputation rates.

“These national data, with almost 6 years of follow-up, demonstrated a strong association between a history of foot ulcer and amputation or death,” they wrote, noting a number of covariables as well.  “Factors including social deprivation, mental illness, and vascular risk factors need to be addressed in order to reduce premature mortality and amputations for people with diabetes and foot ulcers.” 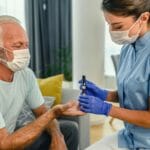