Patients with total hip replacements should submit to annual urinary biomarker testing to detect their risk of developing osteolysis or to identify ongoing peri-implant osteolysis before significant bone loss occurs (indicating poorer outcomes for revision surgery), according to a study published in the Journal of Orthopaedic Research.

This study sought to characterize urinary biomarkers that could identify total hip replacement patients who eventually develop peri-implant osteolysis, for which revision surgery is the primary treatment. The study sample included 26 patients who underwent primary total joint replacement surgery between 1989 and 1997 and received regular radiographic evaluations. Repositories of 24-hour urine samples were obtained for the participants at diagnosis, before and after surgery, and annually thereafter for 6 years.

Of the 26 participants, 16 developed peri-implant osteolysis; patients were matched between the osteolysis and the non-osteolysis groups according to post-implantation times. Urine samples were tested for 7 biomarkers: free deoxypyridinoline, cross-linked N-telopeptides, interleukin-6, interleukin-8, osteoprotegerin, α-crosslaps, and β-crosslaps.

As an individual biomarker, deoxypyridinoline demonstrated the greatest ability to predict osteolysis with the highest area under the curve in Receiver Operating Characteristic analyses. Osteoprotegerin, cross-linked N-telopeptides, interleukin-8, and β-crosslaps did not reveal differences between the study groups at any post-operative time point.

Limitations of the study included a small sample size, and further research using independent cohorts is required to validate the study findings. Missing values at various time points in the follow-up period were addressed by normalizing biomarker measurements to the pre-operative value. Finally, patients that had variable implant designs and heterogeneous implant materials could have impacted the results.

The identification of specific non-invasive biomarkers or biomarker panel can be used to detect ongoing peri-implant osteolysis before the emergence of radiographic symptoms or serve as a clinical risk factor before significant bone loss occurs. This finding further demonstrates the importance of detecting pre-existing factors that lead to subsequent osteolysis.  Researchers wrote, “the combination of α-CTX, a bone resorption marker, and IL-6, an inflammatory marker, lead to high accuracy in the differentiation of patients who eventually developed peri-implant osteolysis from those with no signs of osteolysis.” 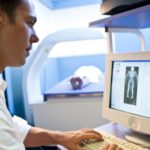