(HealthDay News) — Women and men aged younger than 70 years who are treated for osteoporosis have an excess mortality risk, according to a study published online in the Journal of Bone and Mineral Research.

Bo Abrahamsen, MD, PhD, from Glostrup Hospital in Denmark, and colleagues conducted an observational study tracking prescriptions for osteoporosis drugs, comorbid conditions and deaths. Data were included for 58,637 patients and 225,084 age- and gender-matched controls. Patients were followed until the end of 2013, for a follow-up period of 10 to 17 years.

There was only a small increase in risk in the first year of treatment for women aged older than 65 to 70 years, followed by mortality that was lower than background mortality.

“This study shows an excess mortality in men and in women below age 70 who are treated for osteoporosis, compared with the background population,” the researchers wrote. “This excess risk is more pronounced in the first few years on treatment.”

The study was funded by Novartis, Nycomed/Takeda, NPS Pharmaceuticals, and Amgen; two authors disclosed financial ties to the pharmaceutical industry. 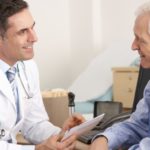