Nitrogen bisphosphonate use in women may be associated with both better survival and a significant reduction in the rate of bone loss, according to study results published in the Journal of Bone and Mineral Research. Researchers also found a clear association between bone loss and increased mortality risk.

The study included women aged ≥50 years participating in the Canadian Multicentre Osteoporosis Study (CaMos), an ongoing prospective population‐based study that began in 1995. For this trial, the investigators focused on patients with at least 2 bone mineral density measurements. Women were categorized as patients who received nitrogen bisphosphonates (alendronate or risedronate), patients who received etidronate, or control patients who were not using bisphosphonates. Women who received treatment were matched 1:1 to nontreated control patients based on a propensity score, which included age, weight, femoral neck bone mineral density, prior fractures, education, lifestyle habits (smoking and exercise), and comorbidities.

Median follow-up duration was 15 years. In the analysis that included 327 pairs of etidronate users and control patients, there was no difference in fracture risk between the groups (P =.42). Mortality rates were also similar in the two groups (27 vs 23 deaths per 1000 person-years, respectively). The annual rate of bone loss was significantly lower in patients who received etidronate compared with nontreated patients (between-group difference, 0.29% for femoral neck and 0.56% for lumbar spine). Mortality risk was increased in patients with the highest rate of bone loss at the femoral neck vs patients with lower rates of bone loss.

Rapid bone loss was associated with a >2‐fold increased mortality risk compared with no bone loss. The percentage of mortality risk reduction mediated by a reduced rate of bone loss at the femoral neck was estimated to be approximately 39% (95% CI, 7%-84%).

The study had several limitations. Of note, it was not a randomized trial, and due to the epidemiologic nature of the study causality cannot be established. Further, the groups were not well balanced at baseline, with significant differences in fracture risk and comorbidity profiles.

“Although causality cannot be confirmed in an observational study, this statistical mediation analysis suggests that lower rates of bone loss are associated with mortality reduction in those on nitrogen bisphosphonates,” wrote the investigators. 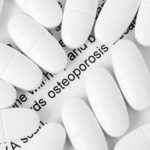