Exposure to lead is associated with decreased femur and spine bone mineral density (BMD) and increased risk for fracture in premenopausal women, according to study results published in Bone.

Lead accumulates at high concentrations in bones after exposure, interfering with bone metabolism and potentially contributing to an increased risk for osteoporosis. Researchers aimed to evaluate the association between lead exposure, BMD, and fracture risk score (FRAX) in adult patients from the National Health and Nutrition Examination Survey (NHANES).

Data were obtained from 1859 individuals from the 2013 to 2014 national survey. Lead exposure was estimated using blood and urine lead levels and BMD was measured using dual-energy x-ray absorptiometry over the femur and spine. Fracture risk was estimated using FRAX scores, which were based on risk factors including age, weight, height, previous history of fracture, and other medical history.

The researchers noted that the cross-sectional design of the study limits the conclusions that can be made regarding causation between the observed associations.

“[W]e found that lead exposure was associated with decreased BMD values of the femur and spine in premenopausal women,” the researchers concluded. “If the association between lead exposure and BMD is causal, lifetime exposure to lead still threatens human health, and continued efforts to reduce lead exposures are needed.” 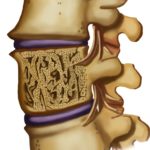 Comparing Use of Anabolic vs Antiresorptive Agents During Vertebral Fracture Healing