Methyl estradiolpropanoate (MEP), a topical soft estrogen cosmeceutical for the treatment of estrogen-deficient skin (EDS) and the concomitant improvement in facial appearance in postmenopausal women, was reported to be effective, safe, and tolerable, according to results of a double-blind, randomized pilot study published in the Journal of Drugs in Dermatology.

An initial safety study on the use of MEP was conducted in 60 women, 53 to 80 years of age, who had been amenorrheic for ≥3 years, with Rao-Goldman wrinkle classification of 3+, Glogau aging classification of II to IV, and Fitzpatrick skin type I to IV. The participants were randomly assigned in a 4:1:1 ratio to receive MEP plus vehicle, vehicle alone, or control moisturizer. The products were applied to the face 2 times daily for 12 weeks. No adverse events or safety issues were reported, with both the participants and the investigator rating the tolerability of MEP plus vehicle as excellent.

In the subsequent efficacy study, 80 women, 53 to 80 years of age, who had been amenorrheic for 3 to 10 years with the same wrinkle classifications, aging classifications, and skin types as in the safety study were evaluated. The participants were randomly assigned in a 3:1 ratio to MEP plus vehicle vs vehicle alone. Of the 80 participants, 79 successfully completed the study, with 1 participant having missed the last study visit at week 14. No statistically significant differences in measures of tolerability were observed between the MEP and vehicle groups after twice-daily treatment on the entire face and upper lip for 14 weeks.

At week 10, a statistically significant blinded investigator-rated improvement in skin atrophy (P =.028) and skin dullness (P =.001) was reported in the MEP group vs the vehicle group when compared with baseline. According to the investigator, MEP plus vehicle was associated with improvement from baseline at week 14 in dryness (P <.001), laxity (P =.001), atrophy (P =.003), and dullness (P <.001) compared with vehicle alone.

The investigator concluded that the novel concept of a safe, efficacious soft estrogen facial cosmeceutical may offer benefits with respect to facial appearance among postmenopausal women. Presumably, it is the estrogen-binding activity of MEP that provides these benefits. 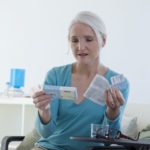 Higher Risk for Venous Thromboembolism With Oral vs Transdermal HRT