Women who undergo the surgical removal of both fallopian tubes and ovaries to prevent pelvic serous carcinoma experience declines in cognition within 6 months of the surgery due to the onset of early menopause, shows a new study published in the journal Menopause.

Women who are at high risk of developing ovarian cancer often opt to remove both the fallopian tubes and ovaries to prevent pelvic serous carcinoma, but it can lead to premature menopause. Because little is known about how the surgical procedure effects long-term cognition and well-being, researchers led by Heidi Chang, MD, of East Bay Gynecologic Oncology, Walnut Creek, CA, conducted a prospective study of premenopausal women who underwent the surgery — called risk-reducing bilateral salpingo-oophorectomy (RRSO). Their goal was to determine changes in cognition over time and assess the impact of hormone therapy on cognition.

This was a small prospective study of 57 premonopausal women of which 64% were assigned hormone replacement therapy after the surgery. The women were surveyed before and after surgery with the Functional Assessment of Cancer Therapy-Cognitive questionnaire (at 6, 12, and 18 months). At 6 months after the surgery, cognitive impairment reportedly declined by 5.5 points overall (4.4 in non-hormone therapy users and 6 in hormone therapy users, P = 0.003.)

The use of hormone therapy did not make a difference significant enough to impact scores, nor did it resolve sleep disruption. However, the patients did report improvements in depression after the surgery (P = 0.004).

“In the first 6 months after RRSO, perceived cognitive impairment, the primary study endpoint, declined significantly from baseline. By 18 months, self-reported scores improved or returned to baseline. Similarly, the use of hormone therapy was associated with a greater decline in scores at the 6-month period, which was no longer detected at 18 months. Perceived cognitive ability did not change over time in the whole group, and hormone therapy users had a decline in scores that did not meet clinical significance. The other domains of cognition did not change over time compared to baseline. Patient wellbeing had variable response to surgical menopause over time over the study period. HT had no impact on patient wellbeing. Sleep disruption was the domain of wellbeing most adversely affected by RRSO in first 6-12 months. In contrast, the prevalence of self-reported depression improved significantly at 18 months,” the researchers wrote.

There were several limitations to this study. The study was closed, and due to the small number of enrollees, researchers were unable to make strong conclusions at the 12- and 18-month follow-up periods. One-third of the women did not complete the full 18-month study period. Also, due to the small sample size, researchers were unable to determine the long-term impact of hormone therapy and the surgery itself.

It is noteworthy, however, that the patients reported having less depression after the surgery, the study authors noted.

“Women can be reassured that there is less reported depression after risk-reducing surgery. Sharing this information with high-risk women prior to surgery may alleviate some of the anxiety associated with the cognitive and well-being sequela of their surgery. These findings may better prepare them for the transition induced by surgical menopause in addition to significantly reducing their risk of ovarian cancer,” researchers wrote. 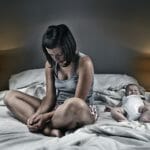