Mifepristone may be an effective alternative to adrenalectomy in patients with hypercortisolism caused by primary bilateral macronodular adrenal hyperplasia (BMAH), according to study results published in The Journal of Clinical Endocrinology & Metabolism.

Researchers conducted this retrospective analysis of 4 patients with bilateral BMAH-related hypercortisolism to evaluate the efficacy and safety of mifepristone treatment in place of surgery. The patients received mifepristone because they had not responded to unilateral adrenalectomy, declined surgery, or were poor candidates for surgery.

Case 1 was a 71-year-old woman with diabetes who received daily mifepristone for 1 week before discontinuing and undergoing surgery despite her physician’s discouragement. One month after surgery, she was found to have BMAH, which physicians treated with hydrocortisone to little effect. She was subsequently restarted on mifepristone at a weekly dosage of 300 mg, which was increased to 300 mg 3 times per week. Over the first 8 months after restarting therapy, the patient’s hemoglobin A1c significantly improved, as did other clinical measures. She was admitted to the hospital 14 months after reinitiation of mifepristone in a hypertensive and hyperglycemic state and died from a cardiovascular event.

Case 4 was a 27-year-old woman with prediabetes who wanted to become pregnant but had severe hypercortisolism, which ruled out immediate bilateral adrenalectomy. She was treated with 300 mg/d of mifepristone to resolve comorbidities, and after 2 weeks saw significant improvements in blood pressure, fasting plasma glucose, and body mass index. After titrating mifepristone to 900 mg/d over 6 months, most signs and symptoms of hypercortisolism were abated. The patient subsequently underwent successful surgery that resulted in no adrenal insufficiencies and allowed her to conceive.

Summarizing their findings, the researchers said, “Mifepristone elicited substantial clinical improvements and, in some cases, improvement in cardiometabolic parameters with accompanying weight loss and improvement of Cushingoid features and neuropsychiatric symptoms after a median treatment duration of 5 months.” 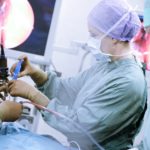