Among patients with nonalcoholic fatty liver disease (NAFLD), fibrosis stages F3 and F4 are associated with an increased risk for liver-related complications and death, according to a study in the New England Journal of Medicine.

The findings are based on data from the NAFLD Database Study Phase 2, a prospective, noninterventional registry of the nonalcoholic steatohepatitis (NASH) Clinical Research Network. Participants were adults with liver biopsies that confirmed NAFLD and who had at least 1 follow-up visit after 48 weeks.

All hepatic decompensation events were greater among patients with stage F4 disease than in those at lower stages. The incidence of type 2 diabetes, hypertension, and a decrease in estimated glomerular filtration rate were also greater in stage F4 fibrosis vs stages F0 to F2.

A multivariable model adjusted for age, sex, race, type 2 diabetes, NASH or NAFLD, and fibrosis stage at baseline showed that any new hepatic decompensation event was associated with death from any cause (HR, 6.8; 95% CI, 2.2-21.3).

Study limitations include the predominantly White population. Additionally, the widths of the confidence intervals around the hazard ratios were not adjusted for multiplicity and did not allow statistical inferences regarding the associations. Finally, the majority of deaths occurred outside the study sites, and the quality of the data was mixed regarding the cause of death.

“These data may be helpful in the assessment of prognoses and in the use of treatments for NASH,” the investigators concluded.

Disclosure: Some of the study authors declared affiliations with biotech, pharmaceutical, and/or device companies. Please see the original reference for a full list of authors’ disclosures. 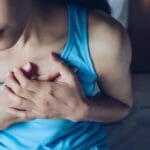