A family history of a mother with this disorder. A mother with a history with the following: blistering that resolved as an infant, extensive dental work due to missing or peg shaped teeth, vertex alopecia, retinal disease or multiple male miscarriages. Blistering at birth or shortly after birth, particularly on the arms and legs in a blaschkoid distribution that is negative for herpes simplex virus and bacterial infections.

Vesicular lesions (Figure 1) and verrucous stages (Figure 2) of IP are present in a blaschkoid distribution (Figure 3) at birth or develop within the first few weeks of life. Hyperpigmentation follows the verrucous stage in infancy and persists through childhood. Hyperpigmentation usually fades by adolescence and is followed by the hypopigmented or atrophic phase that is seen in adulthood. Hair, nail and dental changes occur in infancy and remain throughout life. Hair changes include vertex alopecia and sparse eyebrows and eyelashes. Nail changes can include nail dystrophy (from ridging to mild pitting) as well as hyperkeratosis and onycholysis.

Additionally, subungual and periungual tumors may be seen in children and adults. Nail changes are less common than dental anomalies and occur in 7% to 40% of patients. Dental abnormalities are present in 80% of patients with IP and include peg-shaped or malformed teeth, hypodontia, delayed eruption of teeth or impacted teeth. Adult teeth may be affected even when baby teeth are normal. Eye findings: Retinal changes, which include: proliferative retinopathy, retinal detachment, foveal hypoplasia, vitreous hemorrhages. Retinal vaso-occlusive events can lead to ischemia and blindness. Other rarer eye findings include microphthalmos, cataracts, iris hypoplasia, degeneration of the optic nerve and nystagmus.

Histopathology: Skin biopsy can be diagnostic if perfomed early. Typical changes include superficial, mid-perivascular, and focal band-like infiltrate of lymphocytes and eosinophils, vacuolar alteration of the basal layer with spongiosis, focal vesicle formation as well as many individually necrotic keratinocytes, and scale crust. Melanophages may be present in the papillary dermis (Figure 4, Figure 5).

Early biopsy in the first two weeks when vesicular changes are present is more diagnostic than a later biopsy; however, there is one review of skin biopsies taken at stage IV that shows that a biopsy may be diagnostic at this late stage. Most biopsies at the late stage showed slight atrophy and some scattered apoptotic cells in the epidermis, epidermal hypopigmentation and reduced melanocyte number. The dermis appeared thickened and homogeneous and revealed a complete absence of hair follicles and sweat glands.

Genetic tests can be perfomed. The molecular pathology is related to mutations in the gene of nuclear factor kappa B (NF-kappa B) essential modulator (NEMO) currently known as IKBKG (inhibitor of kappa light polypeptide gene enhancer in B cells, kinase gamma). With the identification of the NEMO gene and a mutation present in greater than 80% of new mutations, sequencing of the gene is expected to identify approximately 95% of mutations. Genetic testing is especially indicated in affected women considering pregnancy and considering prenatal testing such as chorionic villus sampling or preimplantation genetics.

Additional blood tests: complete blood count with differential will show a peripheral eosinophilia in the early stages of the disease. Genetic testing can be obtained from Baylor College of Medicine in Houston, Texas, or Addenbrooke’s Hospital Molecular Genetic Laboratory in Cambridge, United Kingdom. Additional research laboratories that perform testing can be found at the NCBI/NIH website.

Given the appearance of vesicles in the neonatal period, a vesicle should be tested for herpes simplex virus, and bacteria culture should be performed. If these tests are negative, a biopsy and clinical examination will be confirmatory of IP. After diagnosis, patients should have consultations within the first few weeks of life with neurology and ophthalmology.

IP has a worldwide distribution. No incidence or prevalence data are available on incontinentia pigmenti in the US population but it is estimated to occur in 1 in 50,000 newborns. It mainly affects females as it is fatal in most males before the second trimester. More than 95% of reported cases of IP occur in females. IP has been reported in males with Klinefelter syndrome (XXY syndrome) or as a result of somatic mutations or hypomorphic mutations in the NEMO gene.

Mutation in the IKBKG gene

The IKBKG gene is located on chromosome X, Band q 28. It spans 23 kb and consists of 10 exons. An intrachromosomal rearrangement that deletes exon 4-10 of the gene accounts for approximately 80% of new mutations. The IKBKG is essential for the activation of NF-kappa B transcription factor, which protects cells against tumor necrosis factor-induced apoptosis. It also regulates the expression of various cytokines, chemokines and adhesion molecules. The changes in apoptosis may be responsible for the vesicular and verrucous lesions seen in stage I and II of the disease. It is unclear as to what triggers the neurologic events. The pathophysiology of late changes in unknown.

The peripheral eosinophilia noted may result from excess eotaxin, an eosinophil-selective cytokine that results from the loss of NEMO/IKBKG activity. Activation of these eosinophils may trigger the development of the vesicular stage of IP.

Associated systemic disorders: Neurologic abnormalities of the nervous system occur in 30% of patients. These typically occur in the neonatal period and can include seizures and ischemia from vaso-occlusive events. Paralysis, developmental delay and mental retardation, ataxia, cerebral atrophy hypoplasia of the corpus callosum also can occur. A comprehensive neurologic examination should be completed.

Ophthamologic: The majority of patients have normal vision. The classic eye finding is an abnormal overgrowth of vessels around the retina that resembles retinopathy of prematurity. This finding is reversible if noted early. Rarer eye findings have included microphthalmos, cataract, and degeneration of the optic nerve. In these rarer cases blindness is possible A dilated fundus examination should be performed soon after birth. If there are any suspected retinal abnormalities, an examination under anesthesia may be required. Severe eye findings may be a marker for neurologic abnormalities.

Breast development: Abnormalities can occur in the breast. These range from missing breast tissue to extra nipples to small or asymmetric breast development or changes in nipple pigmentation.

Dermatologic therapeutic options are limited since the disease improves spontaneously on its own. For very inflamed areas, low-potency class 7 or 6 steroids can be used to reduce redness. Topical antibiotics can be used for open areas of the skin to prevent superinfection. Other therapies depend on secondary hair, nail, eye or dental anomalies.

Therapy is supportive since the natural history of the skin disease is to improve over the first few months.

Bland emollients are the mainstay of therapy. For open, crusted areas topical antibiotics such as mupirocin can be used for short periods (weeks to months) to prevent superinfection. If redness or inflammation persists, very low-potency topical steroids (class 7 or 6) can be used for 1 to 2 weeks. Topical steroids include hydrocortisone 2.5% ointment, aclometasone ointment, or desonide ointment.

There is a single case report of using topical tacrolimus 0.1% ointment to clear the vesicular stage, but caution should be used since this improves on its own and risks may outweight the benefit.

Patients should be monitored every few weeks to months by dermatology in the first 6 months for anticipatory guidance and evaluation of skin.

Patients should see ophthamology soon after birth and follow monthly for first 6 months of life.

Neurology consultation should take place soon after birth and management and follow-up will depend on developmental delay or seizure history.

The main goal of treatment is to prevent secondary bacterial infection of skin lesions and to monitor for eye, dental, neurologic and related developmental problems.

IP is usually lethal in males. However a review of the literature shows 72 cases reported in male patients. Three mechanisms for survival have been reported that included the 47 XXY karyotype (Klinefelter syndrome) hypomorphic alleles and somatic mutations. Karyotype analysis and genetic testing for NEMO gene mutation is recommended in all males with suspected IP.

Eight cases of IP with Klinefelter syndrome have been reported in the literature.

Buinauskaite, E, Buinauskiene, J, Kucinskiene, V, Strazdiene, D, Valiukeviciene, S. “Incontinentia pigmenti in a male infant with Klinefelter syndrome: A case report and review of the literature”. Pediatric Dermatol. vol. 27. 2010. pp. 492-5. (This is a case report of a male infant with IP who was subsequently found to have 47 XXY genotype. Because of the additional X chromosome the patient survived this normally X-linked dominant. This case report reviews all cases reported of this phenomenon.)

Fraitag, S, Rimella, A, de Proust, Y, Brousse, N, Hadj-Rabia, S, Bodemer, C. “Skin biopsy is helpful for the diagnosis of incontinentia pigmenti at late stage (IV): a series of 26 cutaneous biopsies”. J Cutan Pathol. vol. 36. 2009. pp. 966-71. (This is an analysis and comparison of skin biopsies of 26 women with molecularly confirmed IP. Most biopsies showed slight atrophy and some scattered apoptotic cells in the epidermis, epidermal hypopigmentation and reduced melanocyte number even in late stage lesions. These findings are diagnostic of IP. Late stage biopsies can still be a useful tool.)

Kaya, TI, Tursen, U, Ikizoglu, G. “Therapeutic use of topical corticosteroids in the vesiculobullous lesions of incontinentia pigmenti”. Clin Exp Dermatol. vol. 34. 2009. pp. e611-e613. (Here an 18-day-old female with vesiculobullous lesions of IP was treated with a compounded mixture a potent corticosteroid (difluocortolone valerate 0.1%) and an antiseptic (chlorquinaldol 1%) twice a day. Five days later, resolution of the lesions was almost complete. Since chlorquinaldol has no known anti-inflammatory activity, the authors attribute this improvement to difluocortolone valerate. Review literature on topical steroid use in IP.)

(This is a comprehensive compendium of human genes and genetic phenotypes. The full-text, referenced overviews in OMIM contain information on all known mendelian disorders and over 12,000 genes. It is maintained by the National Center for Biotechnology Information (NCBI).)

Shah, KN. “Incontinentia Pigmenti: emedicine Dermatology”. (This is a comprehensive review of the disorder including epidemiology, pathogenesis and treatment options.)

Shastry, BS. “Recent progress in the genetics of incontinentia pigmenti (Bloch-Sulzberger syndrome)”. J Hum Genet. vol. 45. 2000. pp. 323-6. (This is a comprehensive review of the genetics of IP including reasons for survival in males outside of 47 XXY genotype. It provides details of the genetics in mouse models as well.) 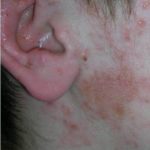