This chapter will review ecthyma gangrenosum caused by Pseudomonas aeruginosa. There are many other infectious causes of ecthyma, which are reviewed in a separate chapter.

The second form is thought to be caused by direct inoculation into the skin, without associated bacteremia. These cases are typically solitary, less severe, and easier to treat. Most patients will give a history of trauma to the area. This has been referred to as nonbacteremic ecthyma gangrenosum. This form has a much better overall prognosis.

Individual lesions of ecthyma gangrenosum from Pseudomonas aeruginosa, independent of the two forms will present with similar skin manifestations (Figure 1, Figure 2). Red, hemorrhagic papules, vesicles, or vesiculopustules will rapidly develop and over hours will form a painless ulcer that is firm or indurated to palpation. Hemorrhagic bullae may also precede the ulcer formation. The ulcer becomes coated with a characteristic black eschar.

Varying amounts of surrounding erythema will be present and can appear identical to cellulitis. The area will be slightly warm to the touch, but not as painful as seen in those patients with cellulitis. Individuals with pancytopenia may have less inflammation surrounding the eschar. No draining purulence is seen.

The vast majority, upwards to 90%, occur on the extremities and perineal/buttocks areas. Patients are most often febrile. Hypotension and tachycardia can be seen in sepsis. Dehydration often is associated and can cause prerenal azotemia.

Laboratory testing will show an increased erythrocyte sedimentation rate (ESR) and C reactive protein (CRP) level. Often neutropenia and a slight anemia is present. The presence of neutropenia and leukopenia are a poor prognostic sign. Skin biopsy will show a necrotizing vasculitis, necrosis of the epidermis, or complete ulceration. Multiple bacteria may be seen in the vessel lumen and within the dermis. Tissue gram stain may be used to better accentuate the gram negative rods

Ecthyma caused by other bacteria or fungal agents. Multiple etiologic agents have been implicated with Stalphylococcus aureus and Streptococcus pyogenes being the two most common.

Cutaneous anthrax can present with a nonpainful black eschar that occurs at the site of inoculation. The area starts as a small papule that vesiculates and then develops necrosis, thus forming the black eschar.

Rickettsial infections can present with a small black solitary eschar at the site of the tick bite, termed tache noire. Typically these are much milder in nature than ecthyma gangrenosum. Patients will have fever and constitutional symptoms and a maculopapular rash that includes the solitary area of tache noire.

Herpes simplex virus and cowpox viral infections have also been known to present with black eschars. The history for herpes simplex is typically one of recurrent vesiculopustules that rupture and then develop an eschar. They are very tender and can be associated with adenopathy.

Cowpox is a rather uncommon viral infection and along with the other orthopoxviruses (smallpox, monkeypox) can from dark black eschars after going through a vesicular stage that lasts anywhere from 10-14 days. The eschar is typically a late finding. Fever, adenopathy and constitutional symptoms are present.

Any immunosuppressed individual is at risk for development of ecthyma gangrenosum. Poorly controlled diabetes mellitus, leukemias (especially with neutropenia), organ transplant and bone marrow transplant patients, and any one taking immunosuppressive medications (such as long-term prednisone, azathioprine, etc) are more prone to infection. Malnourished individuals, premature infants and severely low birth weight babies are also at higher risk. It is highly unusual in healthy immunocompetent patients.

No racial or sexual predilection has been noted; however, it has been reported to occur more commonly in children. For some reason most cases have been reported from Southeast Asia. Patients that have undergone multiple bladder catheterizations, surgical and urological procedures may have a slightly increased risk.

The ubiquitous gram-negative facultative anaerobic bacteria P aeruginosa is the causative bacteria. The bacteria are found routinely in soil and water sources. The bacteria grows and multiples rapidly in warm water and is capable of producing a variety of pigments; the most well known being pyocyanin, which is a blue-green pigment. The bacteria is typically grown in the laboratory on blood agar, MacConkey agar or Pseudomonas isolation agar. It is lactose negative on MacConkey’s agar plate.

The bacterium moves by action of a single motile polar flagellum, and is approximately 3 micrometers in length. It causes opportunistic infections, as patients with intact skin and immune systems rarely develop Pseudomonal infections.

Small cutaneous blood vessels (venules and capillaries) become congested with bacteria. The bacteria activate the complement cascade and an inflammatory nidus is formed. Subsequent vasculitis and necrosis at the local site occurs. This can happen not only in the skin but in other organ systems as well.

Portals of entry can be a cut or burn. The external ear canal will be colonized in a small percentage of patients; those that are immunosuppressed may be at higher risk for dissemination of the pseudomonal bacteria from small defects in the epidermis of the ear canal. These defects can be caused by cotton tip applicators that are used for cleaning the ear canal. Pseudomonas can also be isolated from the intestinal tract of healthy individuals. Studies have shown a rate of 5-30% of intestinal tracts colonized with Pseudomonas.

This is a life-threatening infection that is often associated with septic shock. Prompt recognition and therapy is required to achieve an optimal outcome.

Individuals diagnosed with ecthyma gangrenosum, with no known underlying comorbidities, should have a complete physical examination, including laboratory testing, to determine if they have an underlying undiagnosed immunosuppressed state.

Treatment options are summarized in Table I.

Most P aeruginosa are susceptible to an aminoglycoside and an antipseudomonal ß-lactam (estimated at 90%). Empiric therapy should be adjusted based on individual culture results and isolate sensitivities. The use of antibiotics that Pseudomonas bacteria are resistant to will lead to increased morbidity and mortality.

Dermatologists are typically called on to see these patients as hospital consults. The clinical course is very rapid with ensuing sepsis and septic shock occurring within hours to a day if untreated. An infectious disease consult should be requested. More often the infectious disease team consults dermatology.

The clinical appearance of a dry, nontender black eschar in the setting of an ill patient (immunocompromised or not) should make one highly suspicious of ecthyma gangrenosum. A gram stain of a swabbed area underneath part of the eschar may show gram negative rods.

Discontinue immunosuppressive medications. Empiric antibiotics should be started. Amikacin and piparcillin/tazobactam (Zosyn®) are good initial options. Antibiotic therapy must be continued for 10-14 days. It is critical to adjust the initial empiric antibiotic choice based on culture sensitivities. For synergism, two-drug therapy is advocated with an aminoglycoside and an antipseudomonal ß-lacatam. (Renal dosing is required.)

These are doses for adults with normal creatinine clearance higher than 80:

Blood cultures x 2 should be performed, swab culture of the skin lesions(underneath the eschar), as well as a urine culture. Skin biopsy for hematoxylin and eosin (H&E) and tissue culture is a must.

Treatment of the patients underlying immunosuppressed state should be optimized. (example: a poorly controlled diabetic needs to be kept under excellent control – consult an endocrinologist if needed.)

Neutropenia is a poor prognostic factor. Make sure you get the hematology team involved. G-CSF has been used to try to increase the neutrophil count in neutropenic patients. No studies have been done in this setting to know the actual clinical efficacy. The decision to use these medications should be left up to the hematologist.

Patients should be managed within a hospital setting. An infectious disease specialist or internist should be managing the patient. Intravenous (IV) combination antibiotics are needed and should be based on the cultures and sensitivities. Pseudomonal sepsis has a poor prognosis in immunosuppressed patients and in the elderly and very young. Prompt recognition of ecthyma gangrenosum may allow for timely institution of empiric IV antibiotics. Dosing of antibiotics is based on renal function. Pediatric dosing is required.

It is important to monitor peak and trough levels of aminoglycoside antibiotics to try to avoid toxicity, especially nephrotoxicity, and ototoxicity. Routine monitoring of renal function during the course of administration should be done.

Patients with an underlying immunosuppressed state need to also have this managed to maximize medical therapy.

There has been one case of penile ecthyma gangrenosum in a heroin user after self-injecting a contaminated needle into the femoral vein to inject heroin.

Baron, EJ. “Rapid identification of bacteria and yeast: Summary of a national committee for clinical laboratory standards proposed guidelines”. Clin Infect Dis. vol. 33. 2001. pp. 220-5. (Thorough review of bacterial identification by various laboratory methods. Describes the characteristics of Pseudomonas bacteria when grown on various culture media. This reference is a guide for microbiology, this does not discuss clinical diseases.)

Silvestre, JF, Betlloch, MI. “Cutaneous manifestations due to Pseudomonas infection”. Int J Dermatol. vol. 38. 1999. pp. 419-31. (Excellent review of pseudomonal skin infections. Starts with an overview of the bacteria and discusses each and every type of Pseudomonas skin infection.)

Goolamali, SI, Fogo, A, Kilian, L. “Ecthyma gangrenosum: an important feature of pseudomonal sepsis in a previously well child”. Clin Exp Dermatol. vol. 34. 2008. pp. e180-e182. (Discusses the unusual situation of a completely healthy child that developed pseudomonal bacteremia and ecthyma gangrenosum. No cause was ever found.) 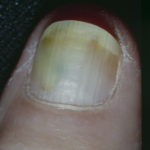