A maternal high-fat diet and maternal obesity may program increased weight and intake of palatable, energy-dense food in offspring, according to study results presented at ObesityWeek 2015.

The researchers noted, however, that exposure to the combination of a maternal high-fat diet and maternal obesity were required to drive the overconsumption of palatable food that is high in fat and sugar content in offspring.

“Moreover, we found that offspring exposed to a high-fat diet exhibited abnormalities in the development of a brain system that regulates reward and the intake of palatable food, known as the dopamine system. Previous rodent studies have demonstrated that maternal high-fat diet consumption produces a drive to overconsume palatable food. Importantly, this is the first time this has ever been observed in nonhuman primates, a model that more easily translates to humans,” said study investigator Elinor Sullivan, PhD, who is an assistant professor in the department of biology at the University of Portland in Oregon.

She and her colleagues have not only found that  maternal high-fat diet consumption and maternal obesity are risk factors in programming increased weight and intake of palatable, energy-dense food in offspring, but they also noted that these behavioral changes may be mediated by reduced prefrontal cortex-dopamine signaling.

Endocrinologists in particular may find the new data intriguing because it points to new avenues of treatment, Dr Sullivan explained.

“Dysregulation of the endocrine system is a contributing factor for the development of childhood obesity and in turn obesity induces endocrine dysregulation. A major example of endocrine dysfunction driven by obesity is type 2 diabetes mellitus. An aim of our research is to identify risk factors that contribute to the development of obesity. We hope to use this information to develop prevention and therapeutic strategies,” Dr Sullivan told Endocrinology Advisor.

She noted the study has limitations, and it only addresses intake of palatable food. Hopefully, future studies can help determine whether central nervous system (CNS) impairments extend to other neural components, possibly the ventral tegmentum and nucleus accumbens, Dr Sullivan said.

Although more studies are warranted, the researchers believe that public health policy should focus on improving maternal nutrition and metabolic health before and during pregnancy.

Studies have shown that maternal pre-pregnancy obesity, pregnancy obesity, and excessive weight gain are risk factors for the development of childhood obesity, according to the researchers. Looking at brain development in offspring and how it is preprogrammed by obesity in pregnancy is an important area of research and has major public health implications.

Dr Sullivan said endocrinologists have good evidence that they can share with their patients. Until now, there has not been a study of this nature, she noted. The findings provide a new motivating factor for maintaining a healthy weight before and during pregnancy. It is important that clinicians have a thorough discussion with their patients.

“Mothers should consume a healthy diet low in fat and maintain normal body adiposity during gestation and lactation. Failing to do so can program impairments in food choice and the drive to overconsume palatable food in offspring. That is, maternal diet and weight can exert a persistent, negative influence on offspring feeding behavior,” said Dr Sullivan.

She added that one of the long-term goals is to come up with an approach that could prevent this preprogramming. For example, it may be that some women need a specifically tailored form of prenatal vitamins.

So far, the researchers have demonstrated differences in the dopamine system, serotonin system, and melanocortin systems. However, it is likely that many other neural systems are impacted, according to Dr Sullivan.

“The long-term goal would be to determine therapeutic interventions to ameliorate the programming of the brain by maternal obesity and high-fat diet consumption. To date, the strongest candidates are anti-inflammatory agents and omega-3 fatty acids,” said Dr Sullivan. 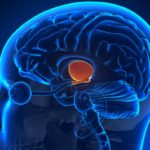 Hypothalamic Gliosis May Be Associated With Insulin Resistance, Obesity