While almost 50% of postmenopausal women experience ≥1 vulvovaginal symptom (VVS), a minority of these patients report discussing their symptoms with a clinician at a well-woman visit, according to study results presented at the North American Menopause Society Annual Meeting, held September 25 to 28, 2019, in Chicago, Illinois.

Researchers in Portland, Oregon, conducted a secondary analysis of a survey administered in 2015 to postmenopausal women conducted to assess the impact of a health system intervention on genitourinary syndrome of menopause. Primary care and gynecologic clinics were randomly assigned to either clinician education and computer support tools or no intervention. Patients were surveyed within 2 weeks of a well-woman visit.

The primary outcome of the current study was a self-reported discussion of VVS at the visit. Vulvovaginal, sexual, and urinary symptoms with bother were elicited from each patient.

Of 1533 patients, 45% (n=695) reported ≥1 VVS by survey; of these respondents, only 39% (n=272) reported having discussed their symptoms at a well-woman visit. Discussion of VVS was associated with the presence of most symptoms but not vaginal dryness or odor. Discussion of VVS was also not associated with the original study’s intervention or the presence of lower urinary tract symptoms, except for dysuria.

A total of 18% of women who did not have a discussion wished that they had. Having a discussion about VVS was positively associated with action by the clinician, including providing written educational materials, suggesting lubricants or vaginal estrogen, and referral to a specialist.

“Discussion of VVS led to helpful interventions, suggesting a role for greater clinician-[initiated] screening for [genitourinary syndrome of menopause],” the investigators concluded. 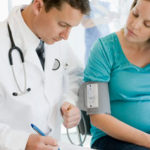 Hypertension in Pregnancy Linked to Severity of Menopausal Symptoms