Known as GC-1, the drug reportedly speeds up metabolism of fat cells. At the meeting, researchers reported that GC-1 dramatically increases the metabolic rate, essentially converting white fat, which stores excess calories and is associated with obesity and metabolic disease, into a fat that acts like calorie-burning brown fat.

GC-1, which activates the receptors for thyroid hormone, may have a unique capability, according to study investigator Kevin Phillips, PhD, who is a researcher at Houston Methodist Research Institute in Texas. He and his colleagues have tested the drug in hundreds of mice and found promising results.

In a series of experiments, obese mice, both genetically obese and those with diet-induced obesity, received GC-1 treatment daily. The researchers found that genetically obese mice lost weight and more than 50% of their fat mass in approximately 2 weeks.

Dr. Phillips said until several years ago, scientists thought that only animals and human infants had energy-burning brown fat. However, he said it is now clear that human adults do have brown fat, but it appears to lose its calorie-burning activity over time.

White adipose tissue becomes a metabolic villain when the body has too much of it. It is theorized that people who have more brown fat have a reduced risk for obesity and diabetes. Consequently, researchers are now working on ways to “brown” white fat.

Dr. Phillips said the newest data demonstrate that GC-1 is a novel fat-browning agent that may have use in the treatment of obesity and metabolic disease.

Although the drug has not yet undergone testing for weight loss in humans, GC-1 is being tested in clinical trials for lowering cholesterol under the name sobetirome. Dr. Phillips said the doses of sobetirome used in the cholesterol-lowering studies are much lower than what would be needed for weight loss.

“Brown fat seems to be good and there is an alluring possibility to use this,” said Dr. Phillips.

“Turning a lipid storage tissue into a lipid-burning tissue” may have significant applications and profound potential, he noted. 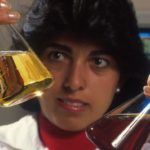