Results of patients’ BMD tests also were compared between the two treatment groups and abaloparatide-SC appeared to result in more bone growth at a faster rate at more skeletal sites and in more patients than teriparatide.

“This is consistent with the mechanism of action of selective binding to the PTHR1 receptor and may suggest that the ‘anabolic window’ is different than has been shown for teriparatide,” Dr. Miller told Endocrinology Advisor. “Abaloparatide demonstrated significantly less hypercalcemia as compared to teriparatide.”

The researchers found that abaloparatide-SC was well tolerated and the most frequently reported adverse events were back pain, arthralgia, upper respiratory tract infection, hypercalciuria and dizziness.

The overall incidence of hypercalcemia based on albumin corrected serum calcium measured pre-injection and post-injection (4 hours) were 0.37% for the placebo group, 3.41% for the abaloparatide group and 6.36% for the teriparatide group.

Teriparatide is currently the only anabolic approved in the United States that grows bone, according to Dr. Miller, while the other agents currently approved in the U.S. for osteoporosis are anti-resorptives such as the bisphosphonates, which preserve bone.

In this current study, the side effect profile of abaloparatide appeared to be consistent overall with teriparatide, with the exception of lower hypercalcemia rates for the abaloparatide-SC-treated patients.

“In this trial, abaloparatide as compared to teriparatide, showed significant improvement in BMD maintenance at the ultra-distal radius at 18 months as well as a reduction in the incidence of wrist fracture,” said Dr. Miller.

He said The National Osteoporosis Foundation has estimated 9.9 million Americans have osteoporosis, and an additional 43.1 million have low bone density. For this very reason, this agent may be important in helping to lower morbidity related to osteoporosis.

“About 50% of Caucasian women will experience an osteoporotic fracture during her lifetime. Additionally, there are 2 million fractures that occur annually and only 23% of [these women] over age 67 ever receive a BMD test or treatment. Many osteoporotic patients, based upon the data, could benefit in reducing their fracture risk based upon the results of ACTIVE,” said Dr. Miller. 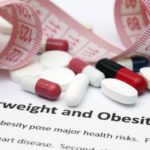 Liraglutide May Aid in Weight Loss in Overweight, Obese Adults