Independent of the protein origin, a 6-week high-protein diet may lead to an improvement in glucose metabolism and a decrease in liver fat content in patients with type 2 diabetes, according to data presented at EASD 2015, the annual meeting of European Association for the Study of Diabetes.

Additionally, results showed that a high-protein diet from both animal and plant sources appears to have no adverse effects on kidney parameters. In fact, data suggest that a plant-protein diet may even improve kidney function.

Researchers from Germany conducted a study comparing the effects of two high-protein diets with the same number of calories on metabolic functioning and liver fat. One of the diets was animal protein-based and the other was plant protein-based.

Their data indicated that high-protein diets may be worth promoting for some patients with type 2 diabetes.

Mariya Markova, who is with the German Institute of Human Nutrition at the Charité University Medicine in Berlin, and colleagues conducted a study involving 37 patients with type 2 diabetes (24 men and 13 women). They examined metabolic markers, liver fat content and signaling pathways in white blood cells and adipose tissue.

Participants’ mean age was 65 years, mean BMI was 30 and mean HbA1c was 7.0%. All were randomly assigned to the high-animal protein (meat and dairy foods) or the high-plant protein diet for 6 weeks.

They found that liver enzyme tests improved after intervention in both groups, and both liver fat and HbA1c were reduced in all participants.

Specifically, the researchers found that in the plant-protein group, there were significant reductions in plasma creatinine (–7.79 mcmol/L) and improvement in the glomerular filtration rate, which went from 75.95 to 88.15 mL/min/1.73 m2.

The researchers reported that they did not see any alteration of the Akt/mTOR pathway in white blood cells after the dietary intervention. However, they reported that the phosphorylation of AMPK, Erk1/2 and 4E-BP1 in adipose tissue was approximately two-fold higher in the animal-protein group.

Results also showed that in the plant-protein group, the phosphorylation of Bad and PDK1 was significantly increased.

The investigators noted that previous studies have reported mixed results, with some showing favorable and others showing adverse impacts from high-protein diets in patients with type 2 diabetes. Based on the findings from this current study, they believe long-term observational studies with a much bigger cohort are warranted.

In studies already underway, the investigators now are looking at the expression of key genes involved fat metabolism, glucose metabolism, inflammation in blood cells and in adipose tissue.  They hope to identify if there are any diet-induced alterations as well as understand the effect of the higher amino acid uptake at the molecular level. 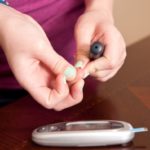