The long-term recurrence rates are low and do not seem dependent on the strategy of initial ablation following recombinant human thyrotropin (rhTSH) for postoperative ablation in low-risk thyroid cancer, according to the latest outcome data from ESTIMABL 1 (Medico-Economic Comparison of Four Strategies of Radioiodine Ablation in Thyroid Carcinoma Patients; ClinicalTrials.gov identifier: NCT00435851), a noninferiority, randomized phase 3 trial.

This trial demonstrated an equivalent ablation rate at 8 months in patients with low-risk thyroid cancer with a low (1.1 GBq) or a high (3.7 GBq) radioactive iodine (I-131) activity and after preparation with either rhTSH or prolonged thyroid hormone withdrawal.1

The new data included 711 patients who were still on trial. The mean follow-up was 61.7 months, and in 91%, the follow-up was longer than 3 years.  The researchers found that among 27 patients with persistent disease at ablation, 16 were retreated with 131-I and 8 underwent surgery.1 The researchers were pleased to see that at the last follow-up, 25 of the 27 patients achieved a complete remission, and only 2 had persistent disease.1

“The message is that rhTSH can and should be used to ablate low-and intermediate-risk patients when necessary,” said study investigator Martin Schlumberger, MD, professor of oncology at University Paris Saclay and chair of the department of nuclear medicine at Gustave Roussy, Villejuif, France.

Dr Schlumberger, who presented the study findings at the 86th Annual Meeting of the American Thyroid Association (ATA), said that among 53 patients with an incomplete ablation at 8 months, 13 were retreated with 131-I and 5 underwent surgery.1 He said at the last follow-up the researchers were pleased to see that 46 were in complete remission.1 They found that 1 patient had persistent lung disease, and 6 had elevated serum thyroglobulin (Tg, defined as greater than 1 ng/mL) on levothyroxine (LT4) treatment. However, they had no other evidence of disease.1

Dr Schlumberger said there have been no thyroid cancer-related deaths reported and the long-term recurrence rate appears to be quite low. In addition, the recurrence rates do not appear to be dependent on the strategy of initial ablation. He noted this follow-up study is important because it validates the use of 1.1 GBq following rhTSH for postoperative ablation in patients with low-risk thyroid cancer, when ablation is indicated. Until now, there had not been any long-term data to support this.

Dr Schlumberger said these data are important because they validate the use of rhTSH and 1.1 GBq for ablation in low-risk patients.

“Following our 2012 publication in the New England Journal of Medicine,2 there was a fear that the use of a low-activity and rhTSH could be associated with a higher risk of recurrence. This is clearly not the case, and the use of a low activity will reduce body radiation exposure and the use of rhTSH will maintain the quality of life and avoid hypothyroidism,” Dr Schlumberger told Endocrinology Advisor.

Another French trial is now ongoing that is comparing the outcome after 1.1 GBq/rhTSH (the new standard) with no radioiodine administration at all in low-risk patients. This is in accordance with the general philosophy of decreasing the aggressiveness of initial treatment in these patients with low-risk thyroid cancer, explained Dr Schlumberger.

Disclosures: Dr Schlumberger has received grants, research, or support, or honoraria from Genzyme/Sanofi. 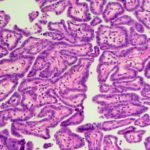 Sequential Combination Strategy May Be Optimal in Advanced Thyroid Cancer