After 6 months of treatment, the INS group had significantly higher HbA1c levels and significantly lower glycemic control rates compared with the OHA group. Rates of hypoglycemia and changes in body mass index were similar in both groups. 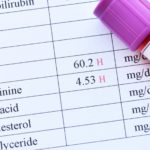